DAN DAVIDSON
​
I was born in 1931.  After a 10 year orphanage upbringing I spent 6 years completing an Aeronautical Engineering Apprenticeship with the De-Havilland Engineering Company, after which I stayed with them for a further 2 years working as a Technical Illustrator. My growing interest in painting eventually led me to an art college and, after graduating, I taught at various institutions before taking up a post at Exeter College of Art in 1966 where I stayed until I retired 24 years later.  I continued painting as much as a full-time teaching post and growing family would allow.  A long retirement has allowed my work to develop to a deeper and more personal level and I now want to introduce it to a wider audience.  Hopefully an illustrated memoir and the internet will provide the means.
Section 1

Hearing ordinary people talk about their lives is often more interesting than autobiographies of the famous. Whilst there are understandable reasons why some wish to keep their stories private, there are other cases where people have become so used to their unusual lives that they cannot see any reason to write about them. It sometimes takes the next generation to recognise their extraordinary histories, but by that time it is often too late, as was the case with my mother. After she died I found a few brief notes which, although badly written, were sufficiently dramatic for me to wish that she had carried on. So when my own family and friends professed an interest in my early life, I determined to do something about it.
My original intention was to restrict the account to a description of my ten years in an orphanage. I then decided to extend it to include the repercussions of that experience on my later life with its conflicting demands on my artistic development and my responsibilities as a family man. A strong theme gradually developed as I found my attempts to describe these conflicts uncovering truths that I was unaware of before I started. It was then that I knew I had to include my paintings. They not only informed each stage of my later development, but conveyed the intensity of my obsession with art far better than words.

Section 2
Orphanage:  This section gives a flavour of the strict regimentation of orphanage life.

Our lives in the house were entirely regimented. We awoke each morning to the sound of Sister Mary clapping her hands at the dormitory entrance. We Immediately pushed the top covers over the bottom end of our bed and stood at the head holding up the bottom sheet for the sister’s slow walk inspection. Wet sheets and pyjamas would be gathered up for the laundry and the culprits punished. I remember one persistent bed-wetter constantly on his knees scrubbing floors. There seemed to be no understanding of the link between bed-wetting and insecurity.

After inspection we each made our beds (including hospital corners) and lined up on the landing before descending downstairs to the washroom. There we stripped to the waist and, six at a time, lathered up our bodies and reported to the sister for another inspection before rinsing off and leaving the washing places ready for the next group. The same procedure was repeated in the evening.

During the week this routine was repeated every day, but on Saturday morning it changed dramatically. The house was cleaned throughout and every child was given a task, the older boys teaching the younger ones. Mine was to sweep the wooden tiled dormitory floor. On my first day I completed the job and took the dustpan of sweepings for inspection. The sister’s response surprised me. “If you had carried out your task properly that dustpan would be much fuller. Go back and try harder”. I did so but was unable to add enough to show the difference.  I contacted the lad who had done the task before me who told me to give him my dustpan and wait in the dormitory. He came back with muck from his secret supply, for which I had to pay two of my precious marbles. He then showed me how to bulk it out. It looked nothing like dirt that had been unceremoniously swept into a pile, but the sister reacted with due seriousness. “It shows what you can do with more effort”.  I didn’t throw the ‘dirt’ away but started my own secret store.

As I got into the problem of dealing with dustbins, I became fascinated with their changing shape as their handlers performed their familiar ritual. Westminster Council took an interest and allowed me into their depot to study their lorries. They also lent me a set of the dustmen’s working clothes.  Using a mirror, I once again posed for one of the positions I wanted.  My patient wife posed for all the others in giant boots which virtually anchored her to the ground.

The painting was carried out under the watchful eye of Norman Blamey, a painter with a well deserved reputation as one of the most accomplished draughtsmen in the country.
Section 4
This section describes my attempts to heighten the emotional side of my personality through the act of painting.


I had to wait until the summer break to work independently and put Bomberg's ideas into practice.   The result was ‘Stokeinteignhead Church’. His technique was to apply paint with a heavily loaded brush which he would proceed to push, pull, stroke, scrape, twist and force in all directions until it equated with the driving energy he experienced in nature. The immediate difficulty for me was that I could not afford his extravagant use of paint, so I restricted myself to the cheaper earth colours. It is why my interpretation is dominated by a rather muddy sienna and yellow ochre.

Although I don’t like the colour, I think the animated application of paint is indicative of the level of my involvement. The result may look spontaneous, but in fact it took many weeks for me to start empathising with the thrusting life force which unified what I was seeing. I also felt a stronger surge of testosterone than usual during that period. It required putting myself into a kind of rhapsodic state that Van Gogh probably experienced. I became totally self absorbed and cut off from the practicalities of family life, an unhelpful attitude for Eunice with a new baby, but exhilarating for me. The world had a vibrancy which was completely new and which I didn’t want to lose. I suspect that it was akin to the drug high that was a common experience at the time. 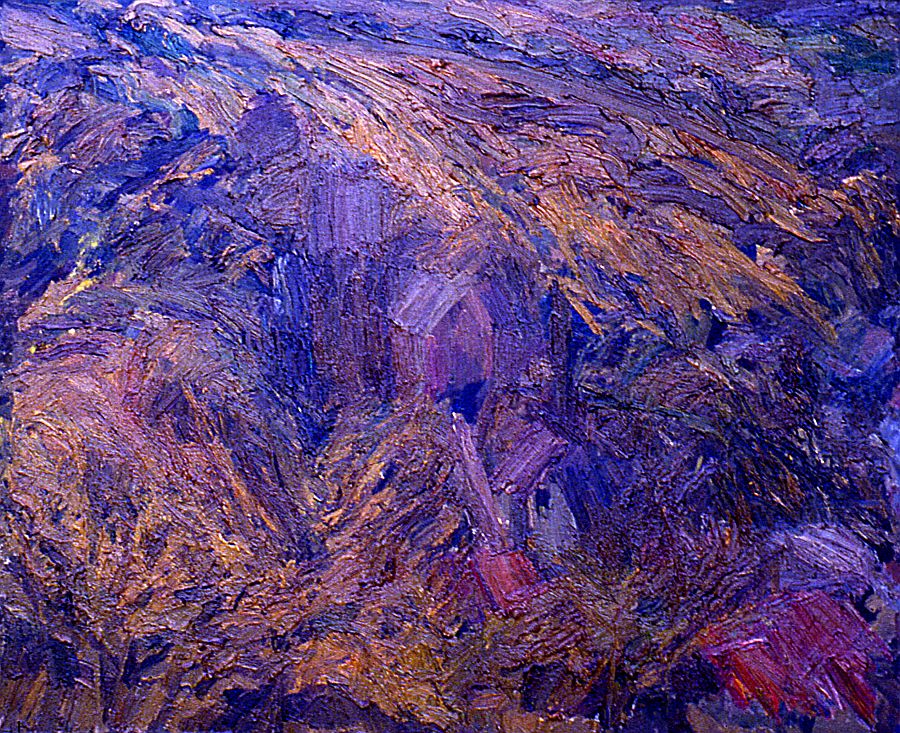 Later I painted ‘Nude on Bed’, (Plate  33) alongside my students. This time however, I was out of my trance-like state so it lacked the same raw power as before. There was more conscious technical control. One advantage was that, as it is a smaller painting, I did not have to restrict the colour. Whilst there is certainly some level of emotional involvement, it is limited because I was torn between giving full attention to my painting or to the students. I was also inhibited about not making a fool of myself in front of them.

‘Stokeinteignhead Church’ painting gave me a deep insight into what it meant to be emotionally involved at that level. I became interested in the circumstances in which certain works were produced, the relationship between the artist’s state of mind and the effect on family and friends. Had I been single, would I have stayed in that world of full-blooded feeling? 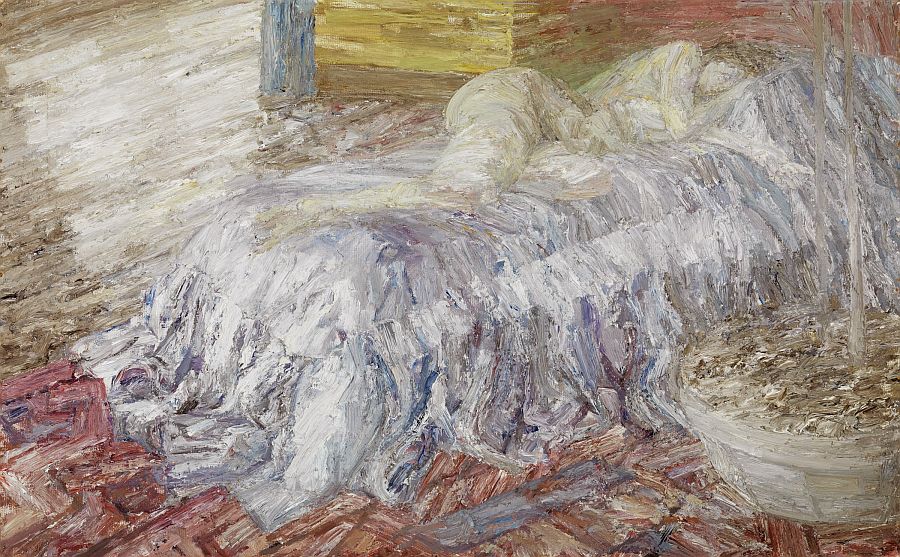 Section 5
A painting of my winter journey to work and its unintended historical significance.

It is a sad fact that because of the changes, I was as happy to be out of the college as I was to get into it 25 years earlier. For a time I enjoyed doing nothing in particular, but gradually the painting hand started to twitch again. For years I had done the occasional sketch on the train as I travelled to and from the college.  Now, perhaps as a result of having left, the impulse to make a statement about the experience, especially the drama of a winter’s journey along the coast during stormy high tides, was irresistible.

Once again I made use of the Cauldfield line language to emphasise that only a thin skin of metal and glass stood between the unconcerned traveller and that ferocious sea. With its mixture of languages it was a strange painting to carry out.  I virtually had to become different people depending which part of the painting I was working on.  The fat paint thrust of the waves required the emotional involvement of my Bomberg  experience, while for the seated figure I became a meticulous academic portraitist. As for that coldly calculated red line, I was right back in the De Havilland technical illustration office. I called the painting  ‘Dawlish-Teignmouth Line’. 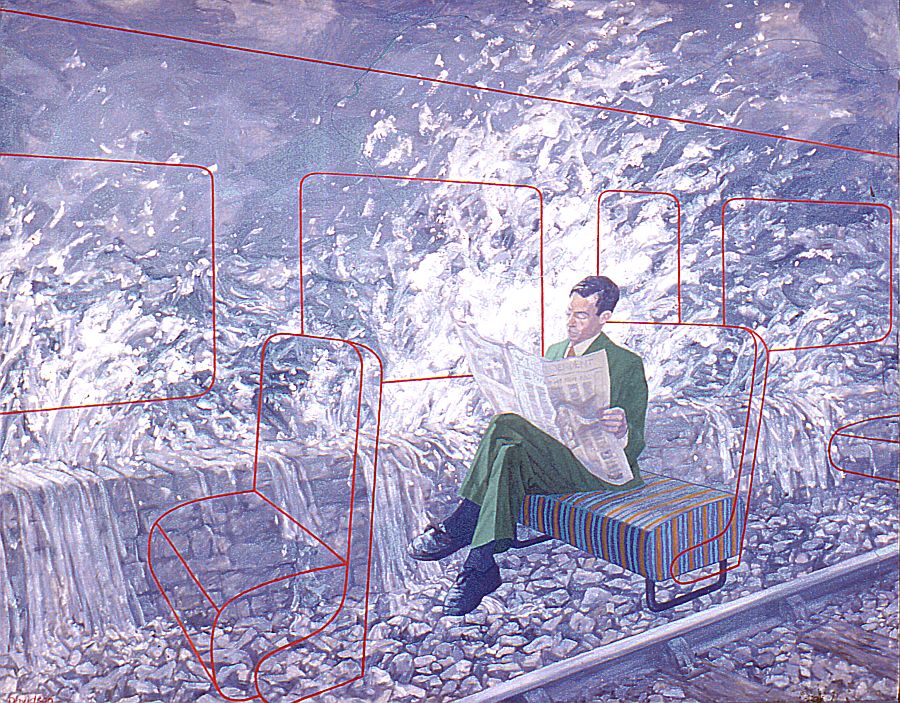 Twenty years after finishing it the winter weather was particularly stormy.  High tides, strong winds and ferocious waves pounded the coast, eventually breaching the sea wall and devastating the line at Dawlish.  It was closed for many months and became the focus of national attention.  The cost in time and money was considerable, giving rise to on-going discussions about re-routing the line away from the coast.  The drama has generated new interest in the painting giving it unintended historical significance.  It is now in the Falmouth Municipal Gallery permanent collection.
Section 6
Intimations of Mortality

Within three years of each other Eunice and I both contracted cancer.  Thoughts of mortality urged me to return to a particular painting I had been working on as soon as possible.

Death is one of the most used themes in the arts and although I do not refer to it directly in the painting, the invisible reaper is certainly the unseen third presence. ‘Double Self Portrait’, places my young and older selves in dramatic counterpoint. The mortality statement is obvious 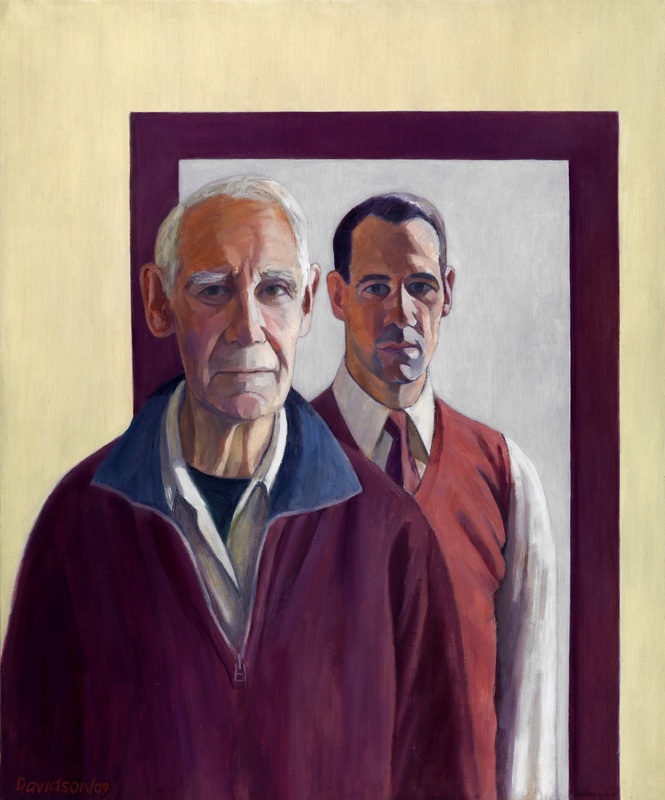